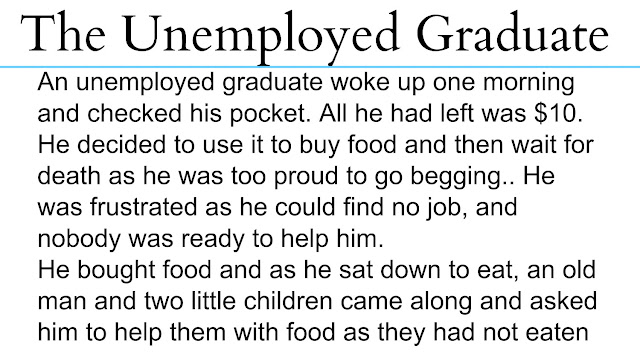 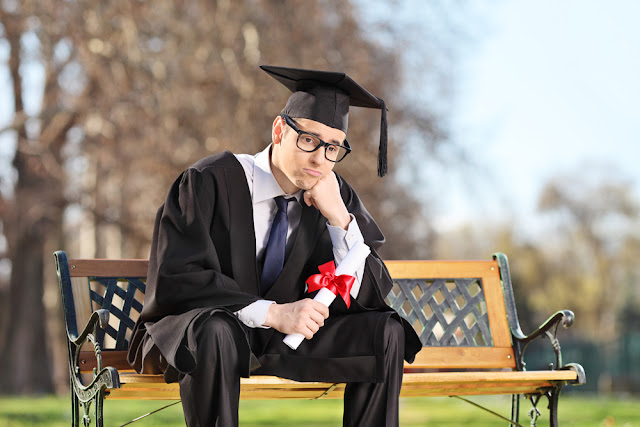 An unemployed graduate woke up one morning and checked his pocket. All he had left was $10. He decided to use it to buy food and then wait for death as he was too proud to go begging.. He was frustrated as he could find no job, and nobody was ready to help him.

He bought food and as he sat down to eat, an old man and two little children came along and asked him to help them with food as they had not eaten for almost a week. He looked at them. They were so lean that he could see their bones coming out. Their eyes had gone into the socket. With the last bit of compassion he had, he gave them the food. The old man and children prayed that God would bless and prosper him and then gave him a very old coin. The young graduate said to them 'you need the prayer more than I do'.

With no money, no job, no food, the young graduate went under the bridge to rest and wait for death. As he was about to sleep, he saw an old newspaper on the ground. He picked it up, and suddenly he saw an advertisement for people with old coins to come to a certain address.

He decided to go there with the old coin the old man gave him. On getting to the place, he gave the proprietor the coin. The proprietor screamed, brought out a big book and showed the young graduate a photograph.This same old coin was worth 3 million dollars. The young graduate was overjoyed as the proprietor gave him a bank draft for 3 million dollars within an hour. He collected the Bank Draft and went in search of the old man and little children. By the time he got to where he left them eating, they had gone.

He asked the owner of the canteen if he knew them. He said no but they left a note for you. He quickly opened the note thinking it would lead him to find them. This is what the note said: 'You gave us your all and we have rewarded you back with the coin,' signed The heavenly hosts..

MESSAGE OF THE STORY
Be kind to people... Learn to be hospitable, for you may not know when you will entertain angels.
at 7:02:00 AM
Labels: Stories
Newer Post Older Post Home