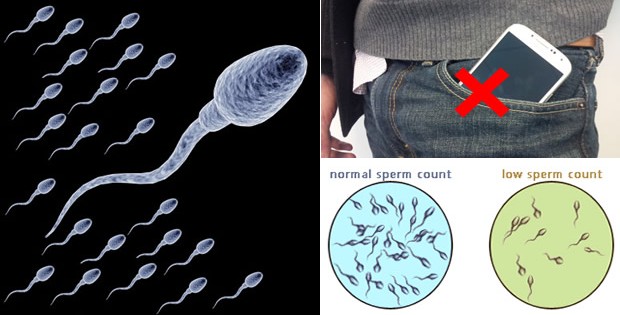 More than 90% of male infertility cases are due to low sperm counts, poor sperm quality, or both. Unhealthy lifestyle habits, stress and improper diet are some of the major causes of low sperm count. Here are 9 things you’re probably doing on a regular basis that may be lowering your sperm count. We are all guilty of making these mistakes without even knowing what harm they are causing us.

1. WORKING WITH THE LAPTOP ON YOUR LAP

One of the most common habits, almost every person who uses a laptop keeps it on their lap. The heat from a laptop can elevate testicle temperature and reduce sperm production. Place the laptop on a desk. If you must place it on your lap, keep your knees together or use a lap pad for added protection, and keep computer sessions short.

Hot shower is relaxing to the body, but it reduces sperm count as the temperature of the testicles are raised. This damages the sperm quality and reduces the count.

The radiation that comes from the mobile phones have a great impact on the sperm count of men. Studies show that heat or electromagnetic radiation that emanates from mobile phones can reduce sperm motility by 8.1% and viability by 9.1%. Avoid keeping your phone in your pocket for long periods.

A study published in the British Medical Journal suggested that drinking as many as 5 units of liquor could possibly affect the sperm quality in a man. Not only could it reduce the sperm count and concentration but also the percentage of normal sperm.
Smoking cigarettes can harm DNA, prompting sperm mutations. Cutting back on alcohol and tobacco is good for general health as well as sperm production.

This is no surprise. Out of a hundred harmful effects to the body, lowering sperm count is one thing that stress is capable of causing. A high level of stress hormones in the blood can lower sperm count, affect sperm production and also affect the sperm quality.

7. INCLUDING TOO MUCH SOY IN YOUR DIET

An excellent source of proteins for vegetarians, soy is known to mimic estrogen in the body. It is believed to increase the production of the female hormone in the body, thereby reducing the male hormone.
A 2008 Harvard School of Public Health study revealed that even half a serving of soy a day was enough to harm a man’s sperm production. Better cut down on that soy milk and tofu.

Tight Briefs Wearing tight briefs can increase the heat in the testicles. This in turn lowers the sperm count. Prefer boxers over tight underwear.

9. LACK OF EXERCISE AND BEING OVERWEIGHT

A higher BMI increases the risk of development of many diseases in the body, including infertility. Obesity also increases the level of estrogen in the body, which directly affects the production of sperm. Extra layers of fat also raise the temperature of the body, especially the groin area, which again heats up the testicles.
at 6:30:00 AM
Labels: Article
Newer Post Older Post Home